In the course of a person’s life, there are a handful of books that leave an indelible impression on their heart, forever stamping them as changed. For me, these books consist of The Hiding Place by Corrie Ten Boom, Embracing Obscurity along with a small, elite group of others I’ll not mention here. Being a writer, I’ve read many books, most of them consisting of entertaining stories and sweet lessons learned. Good reads but not life-changing. That is, until I picked up a copy of Hiding in the Light by Rafqa Bary. 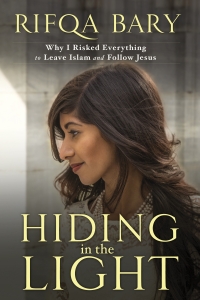 I happened to see a snippet of Rifqa’s story via a Youtube link a friend sent me. I was captivated by this young woman’s journey—a journey taken as a frightened adolescent, abused by her strict Muslim family.

She said her early life seemed happy, joyful until one awful day when her brother threw a toy and damaged her eye. After losing large amounts of blood and after many hospital visits, it was confirmed: Rifqa would be blind in one eye. The brown iris turned into a milky blue. She distinctly remembered from that moment on her family treated her differently. Coldly, as if she were a nuisance. Combine that with being sexually violated by a family member and it became apparent that she had brought dishonor on her family. Never mind that she was just a child and was the victim in both situations. Being a Muslim meant honor, keeping up appearances. And her family told her in no uncertain terms that she had missed the mark.

As she grew, Rifqa noticed the difference between other families and her own—especially the contrast between the loving atmosphere in her friends’ Christian homes and the dark oppression of her own.

Everything changed when a friend invited her to church and she was introduced to Jesus. She gave her life, her hope, her dreams, everything to Him and, in return, He gave her a love unlike anything she’d ever known and an amazing outpouring of courage.

She knew what would happen if she told her family. Her father’s violent temper had been proof enough of that so she kept it hidden…for awhile at least. She would sneak off to church whenever she could, even painstakingly arranging her baptism with a handful of close friends and her pastor, knowing that any slip up in discretion would mean her death. Muslims do not tolerate Christianity. If a Muslim converts, many in their mosques feel the appropriate punishment is an honor killing.

When Rifqa’s secret came out, that’s exactly what her father threatened to do: kill her to retain the family honor.

Oh, and one thing I forgot to mention…all this transpired while living in America.

I was spellbound reading Rifqa’s story. When her secret came out, she determined to endure death for Jesus at the hands of her father but when friends discovered the grave danger she was in, they spirited her away. Two years of legal battles ensued as her parents tried to regain custody of her, along with a terrifying cancer diagnosis but God kept her safe, bringing valiant men and women into her life every time the journey took a twist for the worst. On her eighteenth birthday, Rifqa walked out of the courtroom free. She was no longer a minor and her parents lost any control over her.

Sadly though, Rifqa must always and forever live in some amount of hiding. She can tell no one where she lives and has to take extra measures to ensure her privacy. Failure to do so would likely mean her death at the hand of ‘honor-seeking’ Muslims.

When I finally closed Rifqa’s story at two a.m., I slipped between my cool sheets but I could not sleep. I felt spoiled, enjoying the luxury of a soft bed, cold air-conditioning and unparalleled freedom while an ocean away my Christian brothers and sisters were fleeing for their lives. Some of them, at that very moment, likely praying for the grace to die well…to not deny Jesus in the face of certain death. Just like Rifqa.

Instead of falling into the comforting arms of sleep, I prayed. Prayed for Christians all over the world, suffering with the cold steel of a weapon pressed to their temple. I prayed for my lukewarm Christian friends to wake up and realize that though our freedoms are being stripped, we should cherish each and every one, making the most of every single opportunity to worship in public, to proclaim our Lord in public, to live for Him…not just in private but in public. And I prayed for those women and children trapped in hopeless cycle and dark oppression of Islam, desperate for even a snatch of freedom.

Persecuted Christians an ocean away would give up everything for the opportunity to attend church openly yet our own services are filled with empty pews. Even the once faithful who would attend every time the doors were opened throw away those precious opportunities, making a dutiful Sunday morning appearance but little else. How many oppressed believers throughout the world are desperate for just a page or two of God’s written word, yet many of us have several Bibles, most of which are dusty? It’s a tragedy.

It’s a privilege that Rifqa pursued with every fiber of her being, a freedom that almost took her life. Please, my brothers and sisters, let us not squander our freedoms.

Thank you, Rifqa. You’ve taught me much and reminded me what is truly important in life: Jesus and Him alone. God bless you, my sister.